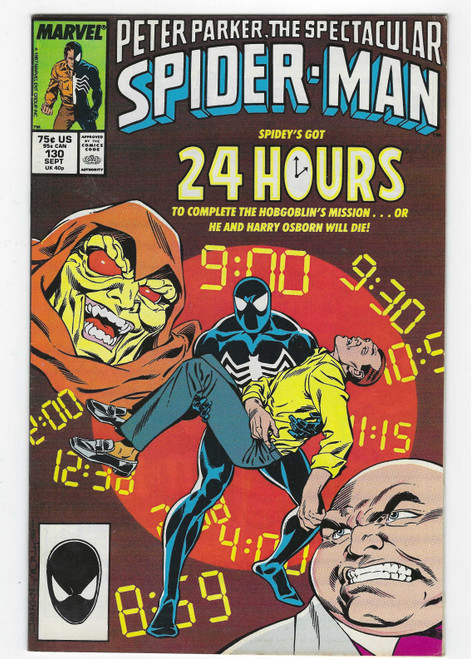 Searching for the Hobgoblin, Spider-Man crashes through the wall of a warehouse, demanding his foe to reveal himself. He finds his foe covered in casts and in a wheelchair. He warns the wall-crawler that if he is touched, Harry Osborn will die. When Spider-Man asks what happened to his foe, the Hobgoblin tells him that it is unimportant and explains his entire scheme...

Two hours earlier, Harry Osborn received a package. Opening it, Harry found a pumpkin inside. Reading the note attached, it warns Harry that he has been poisoned and has 24 hours to live. AS the Hobgoblin had hopped, Osborn contacted Peter Parker, knowing that he had a connection to Spider-Man and would be able to convince the wall-crawler to help. Spider-Man doesn't understand how the Hobgoblin could be in the current condition. The villain explains that he was hired by a European mobster to steal a ledger from the Kingpin. He managed to break into the Kingpin's office and steal the ledger, but he tripped off the security guards. When he attempted to leave, his goblin glider was struck by stray bullets and blew up. It sends the Hobgoblin falling down the side of the building. He managed to break his fall by falling between balconies but was still seriously injured from the fall. He now tells Spider-Man that he wants the wall-crawler to finish his mission and steal back the ledgers and sell them back to the Kingpin for a hefty sum. Spider-Man refuses, but when the Hobgoblin tosses a tracking device at him, he informs Spider-Man that it had coated with the poison that will eventually kill Harry Osborn. The Hobgoblin orders Spider-Man to carry out his mission if he wants to get the cure and save himself and Harry.